Speaking Out about Shyness

While sitting down to write this article, I did a very unscientific Google search for "shyness." The result were as follows: Many websites and videos exist about "how to overcome shyness," and interspersed between those are some interesting and introspective articles.

For the first two decades of my life, that is all I wanted to know about shyness; how to make it go away.

As I approached my third decade, however, I came across this book about shyness. Shyness here is described in a way that I had never thought about, and it was pretty life changing for me. 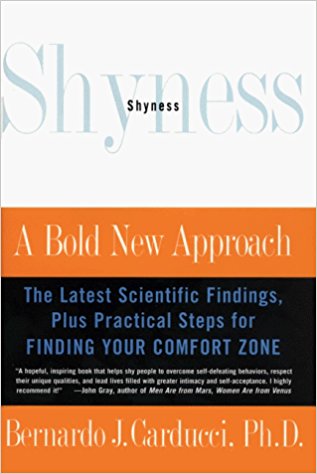 Carducci describes shyness as the feeling of anxiety in a new situation or with new people, and with that definition, that and is not all that unusual. Everybody feels that way sometimes. And, like any other personality trait there is a large spectrum of how people experience and display this behavior. Shy people just tend to hang out on one end of the spectrum of this natural behavior.

I had always felt quite embarrassed at my social incompetence, and as though I was missing out on some natural state of being that most other people just got to enjoy. While reading this book, it was the first time I thought of shyness as something that lots of people feel to varying degrees. Being nervous on the first day of a new job or before speaking to an audience are manifestations of shyness. I know many people who are not shy, who still feel these emotions. That, was a light bulb moment for me. Once I could place shyness into this category, I could think about it the way I do about a whole slew of traits.

For example, I have always known that everyone gets angry sometimes, with some people being downright curmudgeonly and difficult to be around, and others experiencing only occasional frustration. It is not pleasant to be around angry people, but sometimes I admire people's anger. In anger, people get things done. Being calm and patient is important to me as a value, and to my identity, but there can be too much of a good thing. I am so used to being calm that getting angry effects my entire day. Sometime, I am so out of practice, that I don't even realize I am angry until hours later, and my mind is roiling with all the things I could've and should've done and said. It's not all that productive.

So, just like any other personality trait, there are many positive attributes that often accompany shyness. Like, the ability to observe a situation and not react straight away. To notice nuances in people's feelings. The ability to watch and analyze one’s surroundings. Yes and yes. I do those things, and I do them well. And it is at the core of my work with young children.

One more thing the author pointed out from his research is that shyness is viewed differently in different cultures. In some Asian cultures, shyness is a virtue that is encourages and admired. In America, we value people who are open, charming, loud, and boisterous. The life of the party. But it does not have to be that way. Until that moment, it simply had never occurred to me that this thing that had plagued me for as long as I can remember, could actually be seen as a strength. Hallelujah.

And there it was. One day, I did not feel like I needed to stop being shy. I am shy and proud, and it is so much easier and helpful to simply own it. I talk about it openly as I awkwardly socialize with people. Sometimes I struggle. So does everyone. But often it is just freeing. I don't always need to talk. Sometimes I simply engage by sitting back, listening, and watching everyone around me.

Now, here at Tiny Pumpkin Press, we are primarily concerned with young children. And while I love talking about myself just for funsies, it is for the children that I shared my long story about being shy. It is why I love and reviewed both Smile for Auntie and Shy Charles on this website.

Shy children are not the only ones with emotional needs, but I guess I am sensitive about this particular group of children and their parents.

I care because there is a whole slew of polite conversation that is expected of people in general. You know, words like "please" and "thank you," and "Hi, how are you?" And for shy children, this can be so challenging. For the parent of shy children, a child's inability to say these words on command can be embarrassing. Sure, most people understand, but some will cluck their tongues and make you feel like you are raising a rude child.

Trust me, I have had it happen.

I care because often (but definitely not always) young children are more wary of new grown ups, and I believe so strongly in giving children time and space to warm up to new people and new situations. Yes, a lot of people understand. But not always.

So the challenge is, what do we with our young children who might be reluctant to engage with others? How do we accept them, acknowledge their feelings, and still help them be successful and shy?

Feeling Shy Vs. Being Shy

On occasion, as a child, I was told in a loving way, and with the best of intentions, “Don’t be shy.”

Those three words, “don’t be shy.”

It was not a big deal at the time, but when I had children of my own who hid behind me, or held on for dear life when visitors came-a-calling, I never wanted to say those words. And I did not. Because, trust me, if I could have stopped being shy just like that, I would have. It's as helpful as telling someone not to worry when they are feeling worried.

I also never said to my children, “you are shy.” Or even, "You are being shy." I always added the word “feeling” to the sentence. “It looks like you are feeling shy.” Or, “I know you feel shy sometimes, but now that you are bigger, it's important to try and say 'Hi' or 'Thank you' someone holds the door for you.”

Though I am cool with my state of shyness, I did not want to label my children as shy. Because while shyness is now my friend, it wasn’t always, and it still makes things challenging at times. So, I did not want to define them (or for them to define themselves) as shy at a young age. But I did want them to have a name for the feeling, and the challenges that it poses.

When you are feeling shy, you basically have 2 choices:

Young children have a third choice, which is that sometimes a parent will do the talking for you. Also, a valid choice.

I would argue however, that it is also a good idea to not always talk for your child; To sometimes give them the responsibility to make the choice of whether to talk or not; To sometimes experience the disappointment when they can't quite muster up the courage. Because, imagine the joy when they do!

For example, if you are at the playground, and you know your child wants to play with a toy that another child has.

Sometimes, go for it. Help a kid out. No big deal.

But, occasionally, I would say, "If you really want a turn you need to be the one to go ask. I can help you. I can walk over there with you, if you'd like."

If they can't make it over there, and ask for a turn, no worries. You can say, "You are feeling too shy to ask for a turn. Oh well. Maybe next time."

Of course, if they do manage to do it, it is party time! "You did not want to ask for a turn, but then you did it!"

When you are feeling shy you have two choices. Let them experience both choices, so they can decide for themselves.

A Week of Painting at the Art Table in Preschool

The Right Tools for Cooking with Young Children

Saying Goodbye to this School Year